Valero’s Benicia Refinery generously made a $25,000 donation to our ‘Habitat Corner’ new home project in Fairfield, to help us reach our goal of fully funding the project.  Making the check presentation were Sue Fisher Jones, Valero’s Public Affairs Manager and Joanna Zinsli, Refinery Engineer and their Volunteer Coordinator.  On hand to witness the donation were Mayor Harry Price of Fairfield and ‘soon to be homeowners’ Jean Hamilton and Lolita Parker. 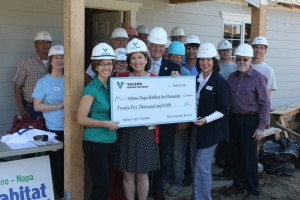 Anheuser-Busch was one of the first local businesses to become a sponsor of our ‘Habitat Corner’ project when they made a $40,000 donation to the project in 2012.  In March 2013, they notified us that they would be making an additional donation of $35,000 to help us complete the project.  Kevin Finger, General Manager of A-B’s Fairfield plant, presented the check to Executive Director, Diane Agnone at the work site, during the first workday of the newly formed Women’s Crew of volunteers at Solano-Napa Habitat. 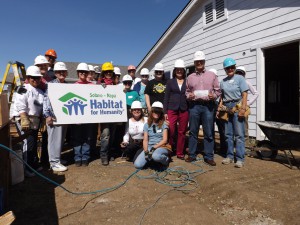 Calpine Corporation made a $1,500 donation to our project when they toured the worksite on April 16th and met future homeowner Jean Hamilton and Board Member, Kathy Hoffman. 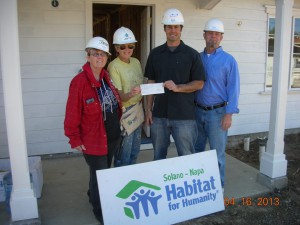 In addition, Mt. Calvary Baptist Church in Fairfield, where Board Member Don Dupree and his wife Beverly are members, sent out a crew of volunteers to the work site and presented the affiliate with a $500 donation from their Outreach Ministry. 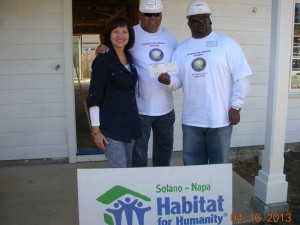 We thank all of these donors for their generosity.